We’ve all been there. It’s a party. We’re celebrating. There’s beer. Maybe even cornhole. We’re in presumably like-minded company. Then suddenly, in casual conversation with a new acquaintance, they drop some opinion, probably political, that contradicts our core beliefs. What now?

Increasingly, I find myself in this situation. It’s no secret I lean left. I listen to NPR and donate to Planned Parenthood. Yet I’m also a military spouse, and while there are certainly liberals among us, it’s not exactly the core demographic. I never want to do or say anything in public that may reflect badly on my husband.

On this occasion, someone made a negative comment about Colin Kaepernick’s refusal to stand during the National Anthem to protest racial injustices in the United States. Many believe, in part thanks to President Trump (typing those two words together always makes my liberal hands recoil), that Kaepernick’s protest was anti-military. As if the military exists to protect symbols of freedoms instead of individual liberties, like free speech. Regardless of whether or not someone agrees that the racial injustices Kaepernick alleges exist (they totally do), I think it’s admirable that he found a nonviolent means of political protest that sparked a national conversation.

Did I say any of this? No. In true 49er fan fashion, I went off on a tirade about how the Niners never should have let Alex Smith go when they promoted Kaepernick to head quarterback.

It was a pass. I do think the 49ers were wrong to let Alex Smith go, but that wasn’t the point. It wasn’t what this woman meant when she disparaged Kaepernick to me. She wanted and expected validation for an opinion that I couldn’t give. Instead of engaging her in a conversation I sidestepped the issue into politically neutral territory. It was eminently ladylike of me. Miss Manners would certainly approve.

It bothered me though. It still does. Not that this woman and I disagreed, but that I didn’t say anything meaningful in response. Shouldn’t this have been the perfect occasion to have a friendly debate? Isn’t that how we open dialog to understand differing viewpoints to help mend the overly partisan rhetoric that is fracturing American society?

But I didn’t want to offend.

Another time recently my husband and I were out with a few military friends. One guy kept interrupting and talking over me. He didn’t do it to anyone else. I was also the only woman there. It felt gendered. I’m trying to give people the benefit of the doubt though because sometimes when you assume, you only make an ass out of one person. I let it slide. Later, when I pointed it out to my husband, he said that yeah, that guy is a bit of a misogynist.

I don’t know why I needed that validation from my husband. I also don’t know why I kept allowing this person to trample me with his words. In retrospect, this man never asked me any questions. He showed no interest when I mentioned my work. I kind of hate the word “mansplain,” but in this instance, there’s no better way to put how he lectured me about military esoterica for a quarter hour that I frankly didn’t need to know and had no interest in.

Again, I was bothered. The situation was different, but it seemed like another instance that I should have spoken up for myself. I knew intuitively that this dude didn’t value me or my voice. I wished I hadn’t let him dominate the space.

I think often women are taught to be meek (how else will we inherit the earth?). It’s not always an intentional lesson, but through countless overt and subliminal messages we’re taught to sacrifice our voices for the sake of other’s comfort. Well fuck that.

We live in a powerful time for women. When the news about Harvey Weinstein first broke I didn’t know why I should care. It was nothing new. Now I get it. What’s come out of that, and the #MeToo movement has been beautiful and empowering. Women are learning to take their voices back.

As a writer, I’m not always great in the moment. I tend to need time to mull over ideas and formulate reasoned responses. But I’m challenging myself not to do that anymore. I will no longer be silent when my morals or my gut tell me to act but when polite society would have me do nothing. It’s a new world, and I intend to be part of it.

It’s almost time for me to leave Newport, RI. My husband, Cameron, and I tried to generate a list of things we’ll miss about the town itself. It consisted of:

That was it. The first item can generally be found by looking at specific neighborhoods in any town. The second is endemic to the whole of New England. The last item wasn’t specific Newport either. Most small towns have their fair share of oddballs. For years, a man in Santa Cruz, CA walked up and down the main street dressed in all pink and smiling broadly at all passersby.

The list of items we won’t miss about Newport is too long to recount here. Suffice it to say that we’re ready for a bigger house and eternal summer in Hawaii.

There is something we will pine for after we leave though: our friends. Cameron and I have connected with some of the kindest, funniest, most caring and intelligent people here. We will undoubtedly miss them.

When I first got to Rhode Island, I had a little trouble making many friendships. Mary-Jaq was my first friend who I regularly spent time with, then Sally. But I knew with every bond I formed that there would be an eventual expiration date. I didn’t want to put too much energy into something ephemeral. I could only handle a few companions.

Then I met Tricia and Jessica. Jessica is the wife of one of Cameron’s best friends, and Tricia and I should have met years ago. She married my friend, Ben, but prior to that she and I ran in the same circle in Monterey before either of us were in the military family. We all clicked.

Suddenly I felt like I had a group. I felt involved. I felt cared for by people other than my husband in this town. I felt like I wanted to spend as much time with my friends as possible before they went on military moves, instead of feeling like I should keep my distance.

Unfortunately, they all PCS’d within a few months of each other. It looked like I was on the friendship dating market once again.

Spouse functions seemed like a good place to mingle. I went to a few, hoping to meet a few ladies. Every time I met someone who acted cool, I’d whip out my phone and request digits. Moments later I’d take this information and facebook stalk my new best friend to make sure she was really as awesome as I’d assumed. This tactic is now lovingly referred to as “forcing my friendship” by a few of my pals.

After months of forcing friendships, I began setting up lady lunches with new best friends. A lot of the spouses in Newport, RI, are unemployed. RI boasts an extremely high unemployment rate, and many spouses are only here for 6 months. It was the perfect recipe for midday hangouts.

The first big lady lunch made me realize that I liked these gals. We were all around the same age and we’re all in Rhode Island because of the Navy. That was enough to get the conversation started.

The group decided to do weekly lunches, and we’d attend as our schedules permitted. One of the early lunches, maybe the second or third, took place at Pour Judgment Bar and Grille. We still didn’t know each other particularly well, but we enjoyed the company. Every now and then there was a brief lull in conversation before a new topic was introduced.

I have no recollection of how this came up, or in what way it was pertinent to the conversation that day. All I know is that after a brief pause someone said she had a friend with two vaginas. Manners were forgotten as mouths fell open. Nobody quite knew how to respond.

Then one gal piped up: “Did you see it? I mean see them?”

Now we were laughing. The vaginas had not been verified by eye witness. The questions and speculations started pouring in.

“Does she have two uteruses? Is that a word?”

“If so, can she get pregnant once in each for pseudo twins?”

I casually mentioned a Reddit Ask Me Anything thread from a man with two penises.

“Those two are meant to be,” somebody responded. Everyone guffawed.

Somewhere amidst the questions and laughter, I realized that this was my group now. I had friends. I had friends who responded with inquisitiveness instead of disgust when medical anomalies were introduced to conversation. I’d had a few friends still in the area before the group started up, and we’re all still friends, and I still love them.   But the larger group made me feel like I had a safety net. It gave me my first inklings of what the extended military family can really mean.

I have male friends and Navy friends here too.  There are too many to name, and I am so grateful for that fact. They will all be missed. Every time one of my friends has left I’ve felt the void of their absence, and it is now just dawning on me that my departure may do the same for those still here.

My last lady lunch is drawing near. I’m not sure where we’ll go. (Ladies, I’m thinking this looks good:) 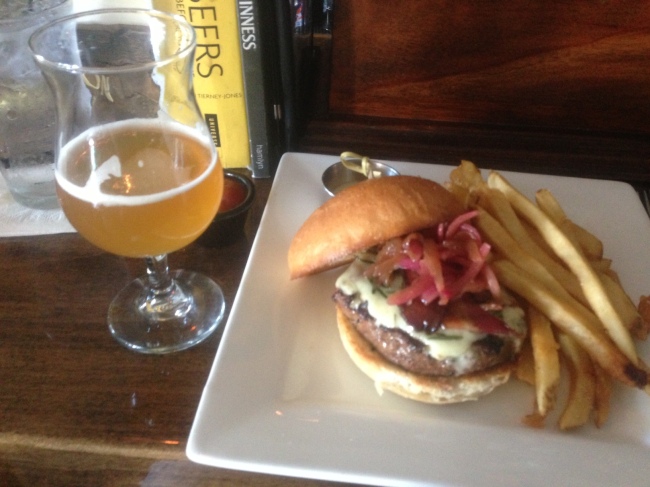 In the last 6 months or so we’ve done high-end and low-end locations, and even had one violin concert potluck. I hope I can make friends in Hawaii who make me feel the same sense of community.

At times I’ve felt like Newport wasn’t worth it. Many people love it here, but in my core I’m not meant for New England.  I despise winter, and I can’t understand a Boston accent. (Excuse me, Baaaaahhhhhstaaahhhn.)  Even with these inconveniences, I’m glad we came.  The people I’ve connected with have made it one of the most memorable and fulfilling experiences of my life so far.