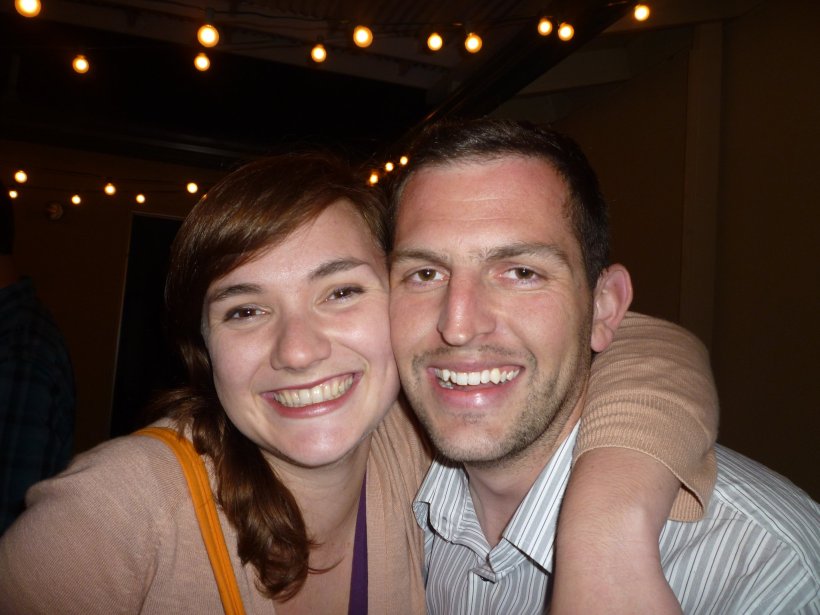 There are a few things I know for certain about that night. I know that I was a god at beer pong. I know I was at a party that I had no business at, but happened to be down the street from my apartment. I know that when I walked in I spotted a guy in a mullet wig with a drawn on handle bar mustache and knew he was a student at the Naval Postgraduate School where I worked. I groaned. There was no way for me to know then that within two years I’d marry that man, and that more than five years later I couldn’t imagine my life without him.

It started with Ramsey. It was a typical Saturday night, and I’d texted my friends to see if anything was going on. I didn’t particularly want to go out, but I wanted to check my options. Ramsey was the one to text back that there was a mustache and wig party (so 2011) in my neighborhood. I could tag along.

I did. Ramsey and I partnered with a stranger and formed a champion beer pong team. On the edges of each game I noticed a guy, the same NPS student, was hanging around. He was a friend of the stranger we’d paired with.

I learned at least one lesson that night: even a champion beer pong team still ends up drinking a lot of beer over the course of a few games. I was not immune. But instead of full-blown inebriation, I was generally feeling good. Karaoke good.

That NPS student started talking to me. Apparently I’d helped him before in my capacity as a registrar employee. He seemed so interested, and for me, just then, that was exactly what I needed.

A couple of months prior to this night, I’d told my then male best friend I wanted to be more. He declined. I didn’t honestly think I’d find anything of value with the opposite sex for many more months or years to come.

Then I met Cameron. He was smoking and drinking cobra malt liquor out of a brown paper bag. He was raised in Tennessee but he doesn’t have an accent, unless he is drinking and around another person from Tennessee. That night he happened to be with a friend from Knoxville.

For the rest of the party we were inseparable. The photo above is actually from that night. After the party wound down he offered to walk me the 4 blocks home. We held hands. I remember him saying he wanted to take me out, and that he could already tell we were going to be “that” couple- the couple that’s so cute it’s annoying. He was right.

I had a tiny apartment then that shared a front stoop with my neighbor, a woman I was pretty sure dealt drugs in her spare time. I’d planned to give Cameron a chaste kiss at my front door and hope he actually called. When we got to my place at around two in the morning, my neighbor was sitting outside with a gentleman caller, and I couldn’t have my adorable good night in front of them.

So I let him in. It was only supposed to be for a few minutes. Just long enough to give a little smooch then say goodnight. But one smooch turned into two, and suddenly I was waking up to daylight, still fully clothed, thank you very much, and a sweaty (also fully clothed) dude was next to me.

Shit. Nothing had happened aside from kissing, but I really wasn’t into finding myself in bed with a stranger after a night out. Now I had to figure out how to wake him up and usher him out.

Cameron was thankfully already awake. We started the awkward dance of conversation between two people who don’t know each other, but happened to share a bed the night before.

Conversation flowed. There were no awkward pauses. We got along. He asked if I was a dog or a cat person. I’d never had a cat before, so I answered honestly: dog.

He told me that he had a dog named Gus. It brought me back to a day in first grade when both of my parents pulled up to school in the minivan even though Sarah and I usually took the bus. They opened the sliding door to the backseat and on the floor was a cardboard box. In that box there was a puppy. We named him Gus. I couldn’t believe this man had his own Gus.

Later in the conversation I asked what he wanted to be after the Navy. A writer, he said. At that time I wasn’t writing. I’d given up on fiction and I didn’t think anyone would be interested in what I had to write about. I still knew deep down that I wanted to write. He wanted the same.

That morning we talked for four hours before he had to go. We could have talked for longer. It’s been more than five years since then and we can still talk for hours. Somehow on that first morning together, between finding out about his Gus (now my Gus) and his facility as a writer, I knew that we had something. We still do.